skip to main | skip to sidebar

Suzanne Miller has been a member of the Hammond Police Department for 14 years. She is a sergeant police officer, and she sees “bad guys” every day. Miller often watches people make decisions that rip their families apart.

Lately, however, she has seen the other side of humanity -- the softer, gentler side. She has watched small communities bond over a five-year-old child and her miraculous story of strength and survival.

Miller’s granddaughter, Madyson, was in a car accident on Sept. 18. Her mother, registered nurse Sonya Watts, had to administer CPR at the scene of the accident to revive her. The accident left Mady in a coma for three weeks and resulted in a severe brain injury.

At first, Sonya and Brian Watts received very little hope concerning their daughter’s future. They were first told that she would die, then that she would have very little brain activity, if any, if she were to live. Now, they are celebrating that she is expected to walk out of the hospital on her own.

Miller always believed Mady would pull through. Like any other grandma would be, she was scared, but her faith never wavered. She prayed hard and clung to her family and church family at New Sharon Baptist. Her friends became her family. Strangers became family too.

“I’m emotional,” she said through tears. “I’m so grateful to everyone who has been there for us. It’s overwhelming how good people are.”

The most recent act of kindness was a fundraiser at the Loranger Volunteer Fire Department. Loranger firefighter Robert Morel Sr. and his wife Cindy, along with Wilbert and Tuffy Campbell, also of Loranger, coordinated the event that included a jambalaya dinner and bake sale. Stores from this small community, as well as in surrounding communities and even some from out of state, donated gifts for a silent auction organized by Marianne Polmon. Eloise Sance of the Hammond Blood Center oversaw the blood drive at the event that collected around 125 pints of blood in Mady’s name, and firefighters who don’t know the Watts family were there from 6 a.m. until 6 p.m. helping with the jambalaya dinner and ensuring the event ran smoothly.

“We could not have made it without the love and generosity from everyone,” Miller said. “I had one lady hand me cash and say, ‘It’s a gift from God.’ Some are giving to Mady’s bank account anonymously. People have been absolutely wonderful.”

In addition to fundraisers, Miller said Madyson is on numerous church prayer lists. Pink "A Prayer for Mady" bracelets adorn the wrists of all her supporters; even Mady is wearing one. Facebook prayer groups are growing by the day, and Sonya and Brian still receive constant messages of support.

“God gave us Mady back,” Miller said. “We’ve all learned so much from her. She’s our miracle. She’s getting stronger every day.”

Madyson’s outlook is good. Her doctors have decided that she will go home on Dec. 23, three months and five days after the accident that turned her life upside down. Her family – the blood relatives, friends and strangers who have come together during these short months – will be waiting with open arms. 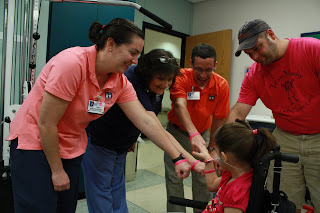 Amber,
Thanks for writing this blog because i had been praying for Mady, but never knew the whole story. God is so merciful and gracious in His love for us and is evident in this child's miracle that has touched so many lives.

Thanks Brandie. Mady's mom Sonya is my best friend from when we were little girls (22 years -- YIKES!). Madyson is continuing to do very well!